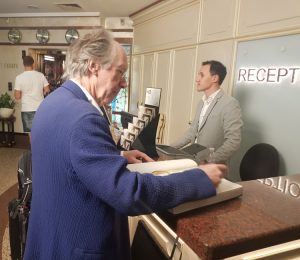 The most renowned English writer, Ian McEwan, was a special guest at the Downtown Hotel in October for the opening of CineLibri 2018.

Famous throughout Europe, the writer celebrated his 70th anniversary this year. The movie adaptation of his novel On Chesil Beach officially opened the fourth edition of the world’s first international book & movie festival.

The British novelist and screenwriter was given the Doctor Honoris Causa Award from the Sofia University St. Kliment Ohridski and the Cinelibri Award for his lifetime contribution to the art of literary adaptation in the language of cinema.

Here is what he wrote in Hotel Downtown’s special Book: