Joana Amendoeira was our special guest 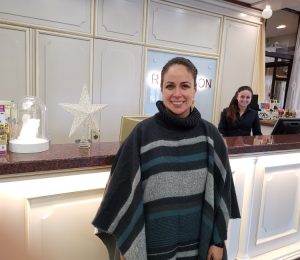 The Fado singer Joana Amendoeira was our special guest at Hotel Downtown. She was here this week for her concert in Sofia on December 5th. Joana is considered one of the most important Fado singers of the New Generation. She artistically combines tradition with new glow and attitude. The audience in Lumiere Hall was fascinated by her charismatic voice and the Portuguese stories in her songs. Hotel Downtown is looking forward to welcome her as our guest for her next concert in Sofia.

Joana Amendoeira was born in Santarém (Ribatejo), one of the Portuguese regions with a substantial Fado tradition. At an early age she discovered the appeal to become a Fado singer. At the age of twelve she won her first prize at the “Grande Noite do Fado do Porto”.

During the course of her career, Joana had the opportunity to perform in Lisbon’s best Fado Houses (“Clube de Fado” and “Sr. Vinho”). This allowed her to absorb the knowledge from the great Fado’s veterans both singers and musicians. The veterans acknowledged Joana’s special voice, attitude, and talent. They kindly conceded her their art, poetry and life stories. Joana’s latest Fado album, “Amor mais perfeito” (2012), is a special tribute to José Fontes Rocha, her master and one of the best Fado’s composers and guitar player.