were special guests at hotel Downtown 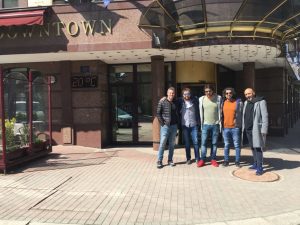 Musical performance from another state of art brought our guests from Estruna – Arcangel & New Bulgarian Voices cond. by G. Petkov in March.

Hotel Downtown welcomed Arcángel, one of Flamenco’s leading voices, Dani de Morón – Flamenco guitar, Rycardo Moreno – acoustic guitar, José Manuel Posada ‘Popo’ – bass and Agustín Diassera – percussion. The band was here to perform live with New Bulgarian Voices choir the music from the Latin Grammy winning album “Al Este del cante” by “Estruna”. The concert on March 31st in the National Palace of Culture dived the audience into a unique musical universe of folklore and flamenco. We are grateful to our guests for making us part of this magic in which we rediscovered the beauty of the Bulgarian musical tradition intertwined with the Spanish culture.

The Estruna project starts in 2012 with a concert by the Spanish singer Arcángel in Sofia and the inspiration of incorporating flamenco and Bulgarian folklore. This idea was embraced by Georgi Petkov – conductor and composer with yearlong experience of mixing folklore and popular music, who formed a new choir of young Bulgarian singers, especially for the project Estruna. The premiere was in Sofia in 2013 followed by more than 30 concerts in Spain, live recordings in August 2017 and finally an album in 2018. “Al este del cante” is the result of five years of dedication and stage experience awarded with Latin Grammy for Best Flamenco Album and undoubtful success for Bulgarian music.